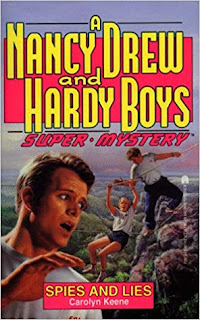 Both of these super mystery books involve Nancy Drew and the Hardy Boys with spies. This is a nice departure from the usual sabotage plot.  However, I did like one of these books better than the other. Will you be able to guess which was my favorite?

There was this interesting aside about guns. "Nancy had always hated guns and their potential for violence." But she does her job and goes to the shooting range and handles guns and ammunition throughout the story.  Another lesson we learn when Nancy and the boys go jogging is "a fit body leads to a fit mind." A throwback to 1992 when the book was written, "Nancy eyed her digital clock." 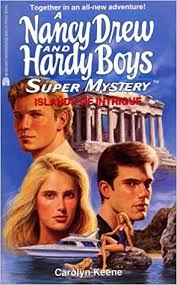 Islands of Intrigue takes place in Greece. The Hardy Boys have been sent to Greece by "The Network" to locate stolen missiles and track down the undercover operative who is suspected of stealing them. Nancy and Bess are only in Greece on vacation. Nancy does find a nice safe mystery to investigate involving a kidnapped heiress.

Ultimately, the Hardy's end up taking orders from a more senior spy at "the Network". Nancy picks locks with her hair barrette and uses judo moves to subdue a bad guy. She also defuses a bomb.
Frank says, "This may be the most frustrating case we have ever been on, ... but at least the scenery is decent."  And if you like the travelogue books, this one has lots of great information about Greece and Greek food and traditions.  However, I get really annoyed by "The Network" and I think it is often a cop out. The Hardy Boys don't do the detective work, they don't follow "John Smith" or look through his papers. They just ask the Network and boom, they know that "John Smith" has a gambling problem or "John Smith" has an alibi.

And so, which book did I like better? Spies and Lies.  I am a huge fan of travelogue books, however, I thought Spies and Lies did a better job of putting Nancy Drew on equal footing with the Hardy Boys.  And of the two, Spies and Lies had less romance.
Posted by Amanda from Seattle at 5:37 PM