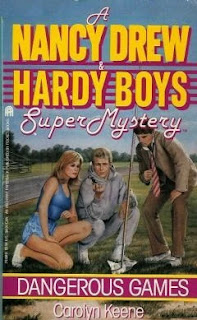 This super mystery starts with Ned Nickerson asking Nancy Drew to come out to Santa Teresa, CA for the International Championship Games. Ned is there working his part time job for an insurance company processing the insurance applications of the athletes. But there have been threats against some of the competitors, so Ned asks Nancy to come to investigate. Of course, she brings along Bess and George. They immediately run into Frank and Joe Hardy. The Hardys were asked to investigate by the head of security for the games. They want to avoid publicity, which is why they have asked the Hardys and Nancy Drew to investigate the threats undercover.
Something interesting in this book is on page 16 where George is asked, "Isn't George an odd name for a girl?" And she replies, " Actually, my real name is Georgia."  George is the only one of the group who goes undercover as an athlete, although, I did enjoy this quote on page 113 after an impromptu volleyball game involving Nancy, Frank and Joe, "for people who claim not to be athletes, you three are in very good shape."
Nancy has a lot of attraction for Frank, even though Ned is there. Ned is working all the time and Nancy and Frank are working together and have so much in common. I have not been enjoying the romance angle in the super mysteries. I was not interested in romances as a pre-teen and I don't really read many of them now as an adult. However, in this super mystery, I can see that a great message is being relayed to the Young Adult readers. Nancy has an established, caring and positive relationship with Ned. She is attracted to Frank, but she honors her commitment to Ned. Ned is also portrayed as understanding and supportive.  I applaud the romance in this super mystery for showing that you can be in a relationship and still be attracted to other people, and that you do not have to act on that attraction. The trust shared by Nancy and Ned strengthens their relationship and their bond.  Here is a quote by Ned on page 216: " Look, I can't change the way I feel any more than you can stop being a detective. Without that, you wouldn't be the Nancy Drew I know and love. If I want to be your guy, I'll just have to learn to accept it, that's all. And if you want to team up with the Hardys, be my guest. I don't mind--as long as I'm still number one with you , romantically speaking."
The mystery is your standard Super Mystery script, some threats, some sabotage. I was glad that both Nancy Drew and the Hardys were equally athletic and shared the spotlight. I am not going to complain too much about the romance because I think it had purpose here. 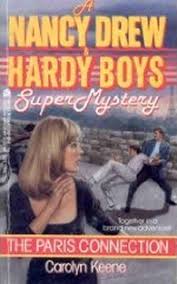 Just when I thought that all the Super Mystery ghostwriters were misogynistic old men intent on portraying Nancy Drew as a girl who is inferior to boys and needs a man to save her, along comes "The Paris Connection."  But wait, maybe I spoke too soon.
"The Paris Connection" was written in 1990. In the other supermysteries I have read lately," The Hollywood Horror" and "Tour of Danger," Nancy Drew is usually on vacation and not even expected to solve a mystery. The Hardy Boys just conveniently show up with a real detecting job and Nancy helps them, or she finds a safe little mystery of her own that she has to convince people to let her solve.  At least "The Paris Connection" starts out right with Nancy Drew being hired by rock star Johnny Crockett to investigate sabotage on his music tour. She and Bess are going undercover with the music tour as part of the publicity staff. We learn that Bess had two years of French language classes, which is sure to be a great help.
The big coincidence happens by page two when Nancy and Bess run into Frank and Joe Hardy at customs in Charles de Gaulle airport. It seems the flights from Bayport and River Heights arrive at the same time!  Frank and Joe are in town to attend a conference on art theft and smuggling.  It is mentioned that Frank and Joe are just as famous in Bayport as Nancy Drew is in River Heights.  By page 68 of the story, Frank and Joe are investigating an art theft and the two cases are linked.
In several places in the story, Nancy gets impatient or becomes irritated.  Not what I expect from a calm, cool detective.  She pulls out her lock picks to escape being held in a dressing room at a theater. But Joe says that will take too long and he slams the door open with a karate kick. Here we have boys and brute force taking over again.  Bess has the prerequisite romance with a member of the music tour. In fact, that is why Nancy becomes irritated. Bess keeps running off with the crew member instead of working on the case.  Nancy is charmed by the star of the show, Johnny Crockett.  And Frank is shown to be a bit jealous, even saying that Crockett is "making a monkey out of her." There is a lot of talk about how romantic Paris is and Nancy feels "the magic of the night and Frank's touch." So of course, Nancy will eventually be dangling over the stage in danger and Frank must come to save her.
I was disappointed once again in a Super Mystery story line. It started off strong, with Nancy being given some credit as a superior sleuth, but soon fell into the old trap of letting the boys do all the heavy lifting.  The mystery itself was lame. The red herring of a single suspect who just keeps getting heaps and heaps of evidence piled against him was used.  I am really getting tired of the romance that is forced into each story, it is very evident that these books were churned out quickly. Each one has followed an outline that is nearly identical.


On a different topic: I am participating in the Washington Trails Association Hike-a-thon during the entire month of August. Ryan is hiking the Pacific Northwest Trail from Montana (Glacier National Park) all the way to the Pacific Ocean on the Olympic Peninsula and I joined him for a few days and I have also done day hikes around Seattle on layovers. Only 2 more days of August left!! Thanks so much to Deirdre and Cecilia who just donated!
I hope I can count on all of you this year for support. Any amount from $1 to $100 is welcome.
You can click on this link to go to my WTA fundraiser page
https://give.wta.org/fundraiser/2179299
or you can send me a check (made out to WTA (Washington Trails Association) or just a dollar in the mail would be very welcome. Thanks so much to everyone who has supported this cause in the past and hopefully again this year!
to: Amanda Arkebauer PO Box 16131 Seattle, WA  98116

Posted by Amanda from Seattle at 5:23 PM