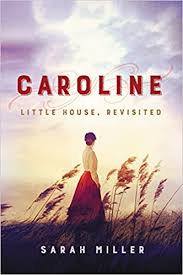 Rich People Things by Chris Lehmann (library) Very interesting and I learned a LOT!
Hijacking the Runway by Teri Agins (audio book) About how celebrities are becoming a major force in the fashion industry. Very interesting, if you are a fan of Project Runway and other fashion shows, check this out.
Caroline: Little House Revisited by Sarah Elizabeth Miller (library) I enjoyed this book (and thought it interesting...it has a blurb in the front saying it has the full approval of the Little House Heritage Trust)  A look at the Little House stories from the point of view of Caroline. So if you love the Little House books, you should put this on your reading list.
Holy Ghost by John Sandford (library) I read it in about 4 hours. Enjoyed every minute. I just think these are so much fun to read. I enjoy the murder mystery aspect and I really care about the characters. The interaction between the characters is fun and real to me. His dialogue is just spot on. Love it!
Laura Ingalls is Ruining My Life by Shelley Tougas a YA book about a girl whose family moves to Walnut Grove, MN so that her mom can get inspiration to write a book. It was fun and if you are a Laura Ingalls fan you might enjoy it.
The First Man by James R Hansen (library) Biography of Neil Armstrong. I really enjoyed it, now to see the movie with Ryan Gosling.
A Piece of the World by Christina Baker Kline (library) a fictional imagining of the life of Christina Olson, who was the subject of the Wyeth painting "Christina's World". I thought it was just okay
Orlando by Virginia Woolf  Ugh, read this one again for a book club....I read it in college (and other Woolf titles) and I am not a fan of Woolf. It was okay. I need to watch the movie again while it is all fresh in my mind.
Major Pettigrew's Last Stand by Helen Simonson (library) If you liked A Man Called Ove, then read this one too, I quite enjoyed it. Similar themes of an older person being bossed around by his children and dismissed by contemporaries in a small town in England.
Perfume by Patrick Suskind recommended by friends. I thought it was just okay. The writing is beautiful, but the subject matter is dark and I did not really enjoy it.

Inheritance by Dani Shapiro (library) a woman finds out that her father was not really her biological father and that she was the result of a sperm donor. It throws everything that she thought she knew about herself and her family into chaos.
The Knock at the Door by Margaret Ajemian Ahnert (library) about Armenian genocide in the early 1900's. Before Hitler started killing the Jews, the Turks were killing the Armenians. Dark, but a part of history that is largely forgotten.
The Blunderer by Patricia Highsmith similar to strangers on a train....two men with horrible wives, one murders his wife and the other has his wife die under the same circumstances, so now he is a suspect in a real way, when he really did not do anything. He is the blunderer of the title and just cannot dig himself out of being a suspect because everything he does points to him as a murderer. I enjoyed it.

Posted by Amanda from Seattle at 2:12 PM