August 1st was the very first day of hike-a-thon this year and it was also the first day that the Naval ships were available for touring for Sea Fair in Seattle. Ryan and I were so torn about what to do all day. So to solve our problem, we combined hiking and Sea Fair. I did 2 miles along the Elliott Bay Trail from downtown Seattle out to Pier 91 where the USS Somerset and the USS Momsen were docked.


We toured the USS Somerset which is an amphibious transport dock. This ship was named specifically for Somerset County Pennsylvania, in honor of the passengers who died on United flight 93 on September 11, 2001. Approximately 22 tons of steel from a crane that stood near Flight 93's crash site were used in the construction of the Somerset

I had to work August 2nd, but August 3rd Ryan and I were back out there and fulfilling another desire of mine. For the past 20+ years while I have been living in Seattle, I have been paying my power bill to Seattle City Light. Every time I get a Seattle City Light bill, I get an advertisement about the Diablo Lake boat tours.  Seattle City Light has been offering tours for more than 80 years. They give you the chance to learn about the area's natural and cultural history and the Skagit River Hydroelectric Project which provides clean, low-cost, renewable power to Seattle. They promise a glorious cruise in glacier-fed Diablo Lake while enjoying views of snow-clad mountain peaks, islands, and waterfalls.  And hearing interesting stories about the early explorers and settlers in the area and the challenges of dams and powerhouses in a very remote location. So for 20 years, I have been tempted by these advertisements and finally I got the chance to go out to Diablo Lake and see where my electricity in Seattle is created and how it gets here to my light bulbs! 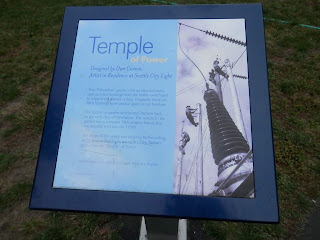 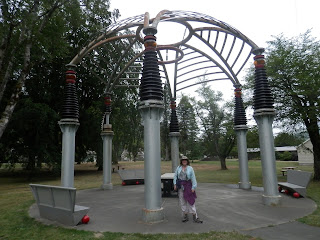 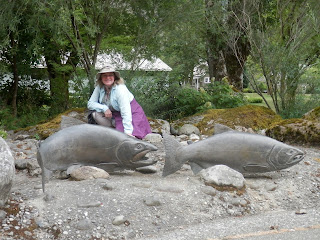 Our tour guide said that when the lights were on the Diablo Dam at night it was like walking through Paris at night, but we did not stay late to see if she was right! LOL


Ryan hiked the Diablo Lake Trail and I did Ladder Creek Falls and the Trail of the Cedars. So I was able to get in some hike-a-thon mileage even with the main focus of the trip being the boat and powerhouse tours.

August 4th on our way back to Seattle, we stopped at the Northern State Recreation Area.  It is the site of what was once the largest facility for mentally ill people in Washington State, Northern State Mental Hospital was opened in 1912. It was designed by the Olmstead Brothers, whose father was famous for having designed New York City’s Central Park. Renowned architects Saunders and Lawton designed the hospital’s buildings. They worked in close collaboration with Northern State’s farm superintendent to create a self-sustaining and therapeutic colony for the mentally ill. The hospital site included patient and staff housing, a water reservoir, sewage system, lumber mill, quarry, steam plant, greenhouse, canning facilities, gymnasium, library, laundry, dining room, bakery, dairy, and 700-acre farm for growing vegetables and raising livestock. A cemetery was also included in the site plan.


At one time in the 1950s about 2,700 patients lived at Northern State. This was the full capacity of the hospital according to the superintendent at the time, but he was still being pressured to take on more patients. The public perception of mental hospitals began to change in the 1970s, and Northern State Mental Hospital closed its doors in 1976 after the State Legislature cut off funding. Some of the buildings, including the farm’s housing ward, have since been torn down. A few of the remaining buildings are currently being used for job corps projects and drug rehabilitation. Many of the buildings are still standing and remind me of a ghost town and there are rumors that the area is haunted.
Here is a great article about  the site


I did 8.8 miles this weekend for hike-a-thon and so far we have raised $402 dollars! But I still have a way to go to make my goals.

Visit my fund-raising page and make a donation. And if you have any suggestions on where I should hike this August, please let me know!!
https://give.wta.org/fundraiser/1515911
You can also mail a check or money order or even cash ! (make out checks to WTA or Washington Trails Association )  Send to: Amanda Arkebauer PO Box 16131 Seattle, WA  98116
Posted by Amanda from Seattle at 8:00 PM