It started a couple of years ago as a New Year's Resolution to keep track of the books I read each month. Last year, I read 256 books, so here I am again in 2014 with a list of the books I read each month and hopefully I can do better. And as a twist, I am going to revisit an old favorite each month. Those books that I read over and over again as a teen. My paperback copies are dog-earred and falling apart, but I have not read them in years. I wonder if they are as wonderful as I remember....So each month, I will have a "classic" book that I read as a teen. My "Flashback" books.  The list includes:  The Thorn Birds, An American Tragedy, Scruples, Where the Red Fern Grows, Lace,  East of Eden, The Stand, Howard's End, Mutiny on the Bounty,Valley of the Dolls,  Cheaper by the Dozen and the Autobiography of Agatha Christie.  If you subscribe to my posts, they will come directly to your email inbox --just enter your email address into the box on the right hand side of the screen. And now for the books: 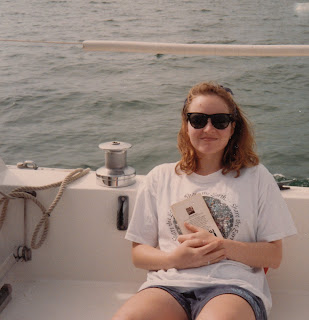 Here I am on a sailboat during college, (notice the UNC gym shorts, I wonder what ever happened to those) Of course, I would sit and read while everyone else worked. Got my "material girl" vibe going too, sunglasses and scarf tying back my hair


Far from the Tree by Andrew Solomon (library) very interesting about parents who have children who are different from them....deaf, gay, etc
Writing Life: L. M. Montgomery by Mary Rubio and Elizabeth Waterston  A biography of the author of Anne of Green Gables
American Eve by Paula Uruburu (library) The story of Evelyn Nesbit and the Murder of Stanford White. Nesbit was basically the first supermodel, the "It Girl" of 1902/1903. Her husband was convicted of murdering famous architect Stanford White. Very interesting story.
Schroder by Amity Gaige (library) about a father who abducts his daughter
Winkie by Clifford Chase (library) this has to be one of the craziest books I have read in a while. It is about a teddy bear who is arrested for terrorist activities. Seriously! That synopsis is why Ryan and I even checked it out from the library, we just had to see what the heck was going on. It's okay. Was expecting it to be funnier....
Among the Shadows by L. M. Montgomery creepy stories from the Anne of Green Gables author and you thought she was all sweetness and light
Tripwire by Lee Child another Jack Reacher novel
When You Were Here by Daisy Whitney (library)  a boy deals with the death of his mother
Sex and Violence by Carrie Mesrobian (library) quite enjoyed it, much better than When You Were Here and some of the same issues addressed...
The Dinner by Herman Koch (library) weird, but if you like weird, you'll like it. I did
This month's Flashback book is The Thorn Birds by Colleen McCullough Yeah, it holds up. My name and the date 1985 are inside the front cover. I just love a big sprawling saga
Never Go Back by Lee Child (library) the most recent....not the best, just okay
Poplorica by Martin J. Smith (library) Fun pop culture trivia
Orange is the New Black by Piper Kerman reading it before seeing the tv show...enjoyed the book, I recommend it
Just One Evil Act by Elizabeth George (library via Nook) first really big book I have read all the way through on the Nook. I think it took me longer to read via Nook than it would have if I had the real book, but I was number 100+ in line to get the real book and the e-version came up within days
Wahoo Rhapsody by Shaun Morey (library) read on vacation in Los Cabos and it is set in Los Cabos...fun very much like Carl Hiassen's Florida books
Dark Light by Randy Wayne White,  Florida mystery
Oops: 20 Life Lessons from the Fiascoes That Shaped America by Martin  J. Smith (library) like Poplorica fun trivia
The Enemy by Lee Child, yet another Jack Reacher, I think I only have two more to read...
The Good Nurse by Charles Graeber (library) true story of a nurse who was a serial killer
El Dorado Blues by Shaun Morey (library) another Los Cabos comic thriller I enjoyed these

I find goodreads.com a great way to keep track of my books and to find new books to read.

Have you checked out goodreads.com

I find it a great way to not only keep track of my books but to find new books to read as well.

I have tried goodreads and did not like it, I really don't need that much help FINDING books to read. I have a HUGE queue....and I was never one to keep track of my books that I have read. I only do the blog for my friends who want to know what I am reading. I was going to stop after one year, but I got so much feedback from folks who wanted me to keep going :-)