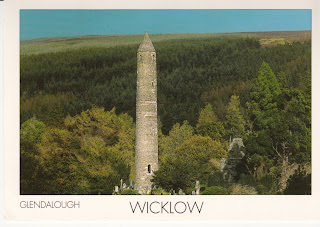 Just outside of Dublin, Ireland, Glendalough was home to one of Ireland's most important monastic settlements. Founded in the 6th century, by Kevin. It was reduced to rubble by English forces in the 1300's, but survived as a place of pilgrimage. The buildings that survived are from the 10-12th centuries. My favorite is the round tower shown in this postcard.  The Round towers served as landmarks for visitors and bell towers, but also were put into use as storehouses or places of refuge during attacks.
Posted by Amanda from Seattle at 6:51 AM