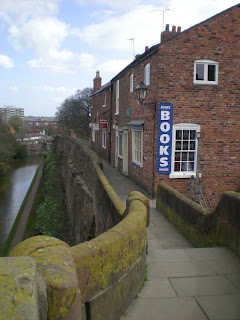 My final post for my reading in 2011! This is a used bookstore in Chester, UK. When I was stuck in Manchester, England during the Icelandic Volcano eruption in April of 2010, I traveled to Chester to do a little sightseeing and of course I visited all the used bookstores!

From Those Wonderful Folks Who Gave You Pearl Harbor by Jerry Della Femina (library)
Mennonite in a Little Black Dress by Rhoda Janzen
Dreamside by Graham Joyce
The American Heiress by Daisy Goodwin (library)
The God of Animals by Aryn Kyle (library)
The Ballad of Tom Dooley by Sharyn McCrumb (library)
This Beautiful Life by Helen Schulman (library)
Next to Love by Ellen Feldman (library)
A Good Hard Look by Ann Napolitano (library)
Maine by Courtney J. Sullivan (library)
The Maid by Kimberly Cutter (library)
11/22/63 by Stephen King
The Accident by Linwood Barclay (library)
Furious Love by Sam Kashner and Nancy Schoenberger (library)
The Mysterious North ed. by Dana Stabenow (short stories)
The Partly Cloudy Patriot by Sarah Vowell

I am a huge fan of the TV show Mad Men and 'From Those Wonderful Folks..." is about NYC advertising agencies in the glory days of the 60's and 70's. Like the book, "Coffee, Tea or Me" which was about the glamorous airline business of that era, "From Those Wonderful Folks..." tells about the advertising world from a fellow who lived it. If you like Mad Men, give it a whirl.

Mennonite in a Little Black Dress is a memoir about a girl who was raised Mennonite, but rebelled a bit. And how her family and her faith are there for her when she is in her forties and getting divorced and hitting rough patches in her life. I was reluctant to read this thinking that she was going to just be all about rebelling and trashing her upbringing. But it was refreshing to hear her acknowledging that it was not such a bad way to grow up. And she explains the difference between Mennonite and Amish :-)

Dreamside, another creepy book by Graham Joyce and I think I am getting tired of his stuff. I really liked Silent Land and had such high hopes for his other books, but I am just not enjoying them as much. Dreamside is a bunch of college kids who get involved in some dream experiments and the line between the dream world and the real world is dissolved. Odd stuff.

The American Heiress is a romance novel plain and simple. It was pretty good. But basically a bit of fluff.

The God of Animals is another "young girl coming of age" novel. The protagonist lives on her family horse ranch and there is all sorts of dysfunctional family stuff going on, I enjoyed it quite a lot.

The Ballad of Tom Dooley is a fictionalized account of the true story that inspired the song. Loved it.

This Beautiful Life is a cautionary tale of the damage that can be done by sending videos over the internet. In these days of bullying and facebook and everyone's personal business being sent over the internet for the whole world to access, it is worth thinking about the things that could go wrong. Very similar to another book I read this year, "Want to Go Private?" by Sarah Darer Littman Very Good
Next to Love is a novel about WWII, the women who are left behind when their husbands go off to war and how they respond when their men come back...or not. It reminded me of the Elizabeth Berg novels about the same time period. So if you like Elizabeth Berg, I would recommend this one too.

A Good Hard Look is a southern novel about Flannery O'Connor. It is a fictionalized account of the last years of her life through the eyes of her neighbors in Georgia. I enjoyed it more than I do O'Connor's own novels. Very melodramatic.
Maine is one of those sprawling novels about a dysfunctional family. It was recommended to me as a great beach read. It features a large Irish family full of alcoholics and repressed emotions. They have a summer house in Maine that features in the plot. I enjoyed it.

The Maid is about Joan of Arc and I enjoyed it. Another historical figure that I did not know that much about (like Cleopatra, who I read about earlier this year). So it was good to learn about her.
11/22/63 is the newest Stephen King novel. I loved it. Of course I am a huge fan. I got this one for Christmas and read it immediately. I loved the time travel part about life in late 1950's early 1960's. It got a little boring for me when it delved into the minute details of Lee Harvey Oswald's life prior to his actions on 11/22/63. For those that do not like horror or are afraid of the horror aspect of Stephen King, there was not anything worse than the "everyday horror" of men who beat their wives and children. The only supernatural part of the book was the ability to time travel. And yes, I read it in about 8 hours. I can't be sure, probably less. I was at work and had to keep getting up to answer call bells and get people drinks etc. :-) I read it in two days, first day on a 4 1/2 hour redeye flight and the next day a couple of hours while waiting to go to work and then about 2 hours on the 5 hour flight back to the West Coast, After all, I was WORKING! They don't pay me to sit around reading all day (if only!! :-)
The Accident is Linwood Barclay's latest thriller. I liked it a lot, his books move quickly and get you swept up immediately in the story.

Furious Love is the story of Elizabeth Taylor and Richard Burton. The Original "Brangelina" who originated the Paparazzi. Before them scandal was the Duke and Duchess of Windsor, Taylor and Burton lived their romance totally in the public eye. They got together at the end of the Hollywood studio system and the beginning of the swinging 60's. A fascinating story.
Mysterious North is a collection of short stories about Alaska lots of famous mystery authors contributed. Sue Henry, John Straley, Anne Perry and more. I love to read these on the plane, I can read a story and then do some work then read another story.
Another Sarah Vowell book, this one is a collection of different essays on all kinds of subjects. I kept wanting to read stuff aloud to Ryan.
Only 16 books read this month. 250 books read in 2011.
favorites were:
The Art of Racing in the Rain by Garth Stein
At Home: A short history of private life by Bill Bryson
The Borrower by Rebecca Makkai
Buried Prey by John Sandford
Assassination Vacation by Sarah Vowell
InZanesville by JoAnn Beard
and 11/22/63 by Stephen King
Posted by Amanda from Seattle at 6:31 PM

I listened to Assassination Vacation on tape (that you kindly sent me!) and it was one of my favorites last year too. I also enjoyed Gentlemen and Players by Joanne Harris. I've just started reading Maine and it's my kind of book, if I can keep the multitude of characters straight!

Keep up the reports please, Amanda!

We love your monthly book reports. Please continue them. Don't make us start a petition, lol. You are so talented in your reviews. Of course, I am one of your biggest fans! : )