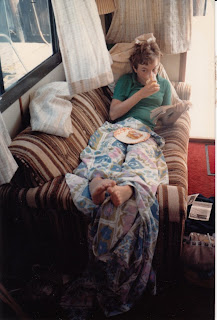 This photo is from the 1980's, reading and breakfast aboard my Dad's boat...

Reading is a great way to improve your vocabulary, here are some words that I found in books this past month that I did not recognize, or that I want to add to my daily lexicon:

raillery - Good-humored teasing
tulgey - Thick, dense, dark (originally in reference to a wood) credited to Lewis Carroll
inimical- Tending to obstruct or harm, unfriendly or hostile
tumbril - A two-wheeled cart, especially a farmer's cart
oligarchy - a small group of people having control of a country, organization or institution
hegemonic- ruling or dominant in a political or social context
comity -Courtesy and considerate behavior toward others, mutual courtesy; civility.
codified - Arrange according to a plan or system, To reduce to a code
lapidary - One who cuts, polishes, or engraves gems
aspidistra - A bulbous plant of the lily family, with broad tapering leaves, native to Asia and often grown as a houseplant
meretricious - Attractive but having in reality no value or integrity, attracting attention in a vulgar manner
koan- A paradoxical anecdote or riddle, used in Zen Buddhism to demonstrate the inadequacy of logical reasoning
micturition- urination


And here are the books I read in June:


Stewart O'Nan, I'm a big fan and I tend to read everything he writes, so this one is his latest. Basically the story of a woman whose husband has died and most of her friends are dying and she is being left alone and how she deals with growing older and alone.

One Day by David Nicholls is a "When Harry Met Sally" type of story. We follow a couple from the day they meet and then revisit that one day in their lives every year for 20 years or so. They are together, they are apart, you get that little snippet of one day of the year to figure out their lives. Very gimmicky, but very enjoyable!

The Winter Sea is pretty much a historical/time travel/romance, but very well done. Scotland setting and Jacobite history.

Cleopatra, I was not familiar with her history...I had never studied it in school and reading this book felt a bit like being back in school. I found it a little dry at times, but Ms. Schiff takes the stereotypes and things you have heard about Cleopatra and looks at the historical record of what really could have happened. So I feel like I learned something.

Jodi Picoult, Sing You Home, again, I am a big fan and read everything that she writes. I have been on the waiting list at the library for this one for a while, but it was worth the wait. Gay Rights and Frozen Eggs/Embryos

The Terror of Living is a great thriller about drug runners along the PNW border with Canada. I read it in a mere four hours!!

Dirty Secret, I read a book about hoarders and hoarding in January, " Stuff: Compulsive hoarding and the meaning of things" by Randy O Frost and Gail Steketee and this book was also mentioned, there are more books in the bibliography of this book that have me fascinated about hoarding also, so I will be reading more of this type of stuff this summer.

The Dry Grass of August, If you liked "The Help", you need to try this book as well. A wonderful story of a family taking a vacation with their maid in the 1950's while Brown vs. Board of Education was being enforced in the South. Also reminded me a bit of "Summer of My German Soldier"...because the young female protagonist has more in common with her Black Nanny than her own family.

Philip Dick, I am continuing to read his short stories in this collection

More Harris and Bowen again this month, almost finished with these series! Also Serenity, another collection of essays about the Firefly TV series.

So Much Pretty got great reviews as a look at a murder in a small town. I found it hard to read. Each chapter is from a different character's point of view or a different piece of evidence. I had trouble figuring out the different voices and I would have to look again at the title of the chapter to see who was supposed to be speaking. Also there is much flashback information from the past and again, I would have to refer to the titles of the different chapters to make sure I could figure out what the heck was going on, is this the past, the near past, the current day? It was confusing. All in all, it was hard to enjoy the book because it was such a difficult read. I read about 2/3 of it before I could enjoy it. Loved the ending. But it was a lot of work for just a thriller type book.

Something Borrowed is Chick Lit and was made into a movie, haven't seen the movie yet and I will be interested to see what parts of the book made it onto film.


Miss Zukas is written by a local PNW author and one of my favorite "cozy" mystery series. She's a librarian in a small Washington town that seems to resemble Bellingham, WA. She is very stoic and terse, but through the course of the series, she has been opening up and it is hard not to like her.

The Body Finder is a YA book. The plot (sub-plot?) of the boy who was my best friend, but now I want him to kiss me...and will he ask me to the prom? (or homecoming dance in this case) is very familiar to this genre. But the twist here is the heroine of our story has a sixth sense where she can find dead things. Animals and People. A serial killer is abducting young girls in her neighborhood and she is key to finding the bodies and eventually the killer.

Ups and Downs is a fun travel memoir of a father and son who trek through the Alps. If you like Bryson's A Walk in the Woods or if you like reading Ryan's accounts of his AT and PCT treks, this would be a book that you would enjoy! I found it at a used bookstore on my Denver layover this month and read it in mere hours on the way home.

Hell at the Breech is based on a true story from 1890's Alabama. Mr. Franklin writes very descriptively, not beautiful, but gritty and violent. An accidental shooting sets off a feud between the poor white share-croppers and the rich landowners, with the sheriff stuck in the middle, trying to keep the peace. It sucked me in and I couldn't look away, like a car wreck!

Another plus for reading so much! My local library is having a summer reading event and for every 3 books you read, you can enter to win a Nook! How cool is that?

21 books in June
Posted by Amanda from Seattle at 6:22 PM

How did The Winter Sea compare to Outlander? Your written summary could apply to either book.....

Outlander was 100 times better than Winter Sea. I didn't like it but I didn't hate it either. Thus the terse little review. Some folks have raved about Winter Sea. But I found it a little bit heavier on the romance novel angle. I liked the historical research bits the best. With Outlander I loved it all every bit of history fantasy and romance

I just finished Jodi Picoult's "House Rules" ~ the first I have read of hers. I am thoroughly hooked and see myself enjoying many hours of catching up on her earlier books.