Last month I had a layover in London. One of my Flight Attendant friends was on the trip with me and although she had been to England before, she had never toured London. So we planned to see the city together with me acting as tour guide. The airline provides us with free train tickets to get into town because we stay out at Gatwick. So the first thing we did was pick up our free train tickets for the trip into Victoria Station. Victoria Station is a lot of fun. There is tons of shopping and restaurants just around the station. There is even a Krispee Kreme Donut shop!

I like to visit the charity shops (that is about all I can afford with the pound being so much stronger than the dollar right now) I have a list of all the charity shops around Victoria Station and we stopped into a couple of them on our way towards Buckingham Palace. Here is a website that lists all the Charity Shops in London with the Closest Tube station: London Charity Shops


We got to see Buckingham Palace. It was a gorgeous day and there were a ton of 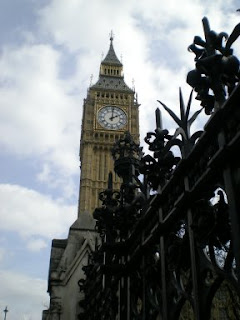 people out and about. We walked through St. James Park on our way to Westminister Abbey and the Houses of Parliment. From Westminister, I had planned that we would take a boat down the Thames to the Tower Bridge. This is my favorite way to see London, from the water. Roundtrip tickets were only 7 pounds or about $14 dollars. We left West Minister Pier and the cruise operators give you a commentary about all that you are seeing along the way. We passed the London Eye and the Aquarium. We also could see the new Shakespeare's Globe theater. We also passed 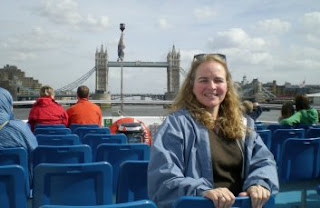 underneath the new London Bridge (the original is now in Lake Havasu, AZ!!) and finally came to a stop at the Tower Bridge and the Tower of London. 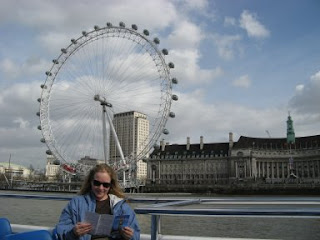 I had visited the Tower several times before, most recently with Ryan two years ago.
Ryan's Website
So I had no desire to tour the Tower. But my friend is a crafty, artistic person and I had convinced her to go to the Little Church by the Tower for some Brass Rubbing.

Brass Rubbing is alot like Tombstone rubbing....if you are familiar with that. The British churches usually have a lot of brass commerative plaques in them and it is "the thing to do" to do rubbings of them! Ryan and I did rubbings in Stratford upon Avon when we were there in 2006. 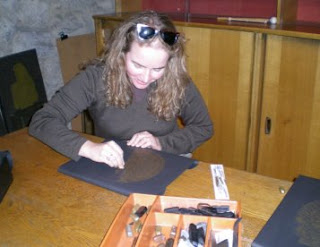 We went to the All Hallows Church by the Tower to do our Brass Rubbing. The All Hallows Church is the oldest church in the city of London. Full of history and an interesting place to visit even if you aren't going to do a rubbing. For only 5 pounds (about $10) we got to make our own piece of artwork to take home. All the paper and waxes are provided for you. Another place to do rubbings in London is at St Martin-in-the-Fields Church near Trafalgar Square.

We walked around the Tower of London (there is a piece of the original Roman Wall on the side away from the river) and visited some of the touristy gift shops there. I bought a cute postcard of London for framing. 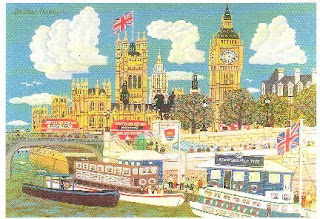 One of the things I do on my vacations is try to find postcards of original artwork that are suitable for framing. This is a really inexpensive way to have a wonderful souvenir of your trip. In London, I found these terrific postcards of art by Andrew Murray. As an example of what I will do with them is this picture of postcards I have of Mont-Saint-Michel, that I got on a trip to France many years ago. I had them framed and they are above my computer desk today. 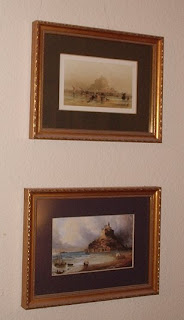 By now we were pretty worn out and we headed back to Westminister on the boat. We had a terrific day in London.
Posted by Amanda from Seattle at 8:50 PM

This brings back great memories of our first trip to London--we got off a flight at 8AM local time; and our tour folks warned us to try to stay awake all day and not nap. So we hit the city, the Tower, the Thames boat ride, and dinner in Covent Garden (fish pie!)before getting an exhausted sleep at our hotel. Such a great day! We missed the brass rubbings--something to look forward to next time.

Amanda! What a shame i didnt know your over in London!! Im from Germany as you know but my fiance is an English and lives just 20 mins away from London ^.^ And ive been with him for the last 3 weeks. We could have met and gone letterboxing! lol
Tonkks

(Sigh) I love England and Scotland. I'm sure I'd love the other countries too, but I've only been to those two.

I love to imagine the 100s of years of history that happened there.

I still have my brass rubbing I did, it was from an Abbey in London. I thought I was going to get to do a rubbing of a stone in a church cemetery, but most of them are worn smooth (so sad).

Glad you had such a great day.

I LOVE your postcard art!! Thanks for taking us on the tour with you. I haven't been to London since I was a teen. I'm now grown with grown children, so we won't go into how long that has been.
I'm curious about one thing - how is letterboxing in London?
Thanks,
Buttercup