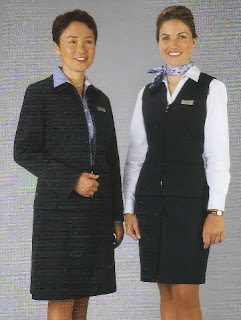 Exciting things were happening at my apartment this week. Hours of watching "America's Next Top Model" and "Project Runway" had prepared me well for the evening that I just spent! I got a HUGE box of new uniform pieces for USAirways. I had to try everything on, mixing and matching to make sure that everything fit. I had ordered 32 pieces and only two were missing. (this is actually better odds than most flight attendants that I had talked to!) I am missing a red scarf and a raincoat, but everything else was there. Lots of washing and hemming and trying different knots with the scarves rounded out the week!

This is a new "business casual" uniform. (I ordered 3 Skorts! :-) We have sweater sets and casual jackets and vests that look like what the postal workers wear. Since every time I go to work, there is someone in the crewroom who is about to "go postal," I guess this is appropriate. I think my favorite piece is going to be the "tailored top." If any of you knew me back in my days when I was based in Charlotte, just after the Piedmont/USAirways merger, one of my favorite old uniforms was a beige dress that we had that was actually two pieces: a top and matching skirt. When worn together, they looked like a single piece. The tailored top

works this way and you can wear it with the skirt, pants or the skort!

The sweaters aren't so great. The shells are nice, short sleeved or a mock turtle long sleeved, but the outer sweater is yucky. It makes you look like you are wearing a track suit. I got one of each color, (we have a dark blue and a light blue) but I don't like them so much. I will need to wear them for warmth, but I think they look silly. But all in all, there are a lot more "girly" items than the old USAirways stuff. Scarves! Hurrah --although I really really really want to put one in my hair! Which is a big NO NO....It's the CLT F/A in me. I just want to have a pretty bow in my hair. :-) I wonder how long it will take til someone breaks the "scarf in the hair" barrier? And could it be me? Am I brave enough?? 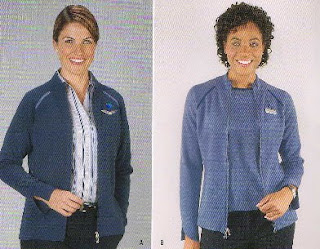 Originally, I was very excited about the skorts, but now I am not too sure about them. They have an almost gaucho thing going on about them that might not work too well with my increasingly stout figure. And I wonder how they are going to hold up to washing!

I will need to get pants hemmed, but otherwise, I was very lucky. My items fit me. Lots of flight attendants that I talked to had to send stuff back because the sizes were all wrong. One of the controversial things about the new

uniform was the apron. The "America West" way of doing things is to have your name embroidered on the apron. I personally have no problem with this. But lots of flight attendants get a bee in their bonnet about people knowing their name. They think they are going to be the target of stalkers or that it will make people a little too familiar with them. I don't know. Anyway, they have their reasons. When we ordered the uniform, you were required to put something down to be embroidered on your apron. Several flight attendants took this opportunity to send a message to the company. And it wasn't "good job". Many of the things put down on the form were a little "blue"!! I actually saw an America West flight attendant the other day with "Inflight" on her apron. I thought this was very clever. Especially if you don't want your name on the apron. But USAirways was adamant about a name on the apron and if you put something off-color/or even silly on the order form or even left it blank, they are going to default to the first name that is on your employee badge.

We are supposed to start wearing our new uniform pieces on March 3rd! I hope to get some pictures out to everyone with ME in my new uniform soon.
Posted by Amanda from Seattle at 5:46 PM

Do you get to choose what uniform you wear or are you told to wear this or that for such and such flight?

Out of all the uniform pieces, you can wear whatever you want. I think there was some talk of requiring us to wear certain items on international flights, but in looking over the information sheet that came with the uniform pieces, they don't say anything about that. The Ladies had 21 different pieces to choose from, and I only ordered 16 of these. For example, there is a one piece dress that looks very Star Trekkie and a regular blazer much like we already wear that I chose not to get. They still regulate what type/color of shoes and hose we can wear and earrings, bracelets, necklaces etc. Whether or not the flight attendants actually adhere to these rules is up for grabs, but there are rules about these things in place and we do get reprimanded when our supervisors catch us "out of uniform." Especially when we have a change over to a new uniform, there will be "gate checks" where supervisors come to the flight gate to make sure you are in proper uniform before your aircraft boards.

I find the lives of flight attendants absolutely fascinating (probably because I only fly once in a blue moon). Thank you for this small humanizing experience. When I resent the crappy snacks that have replaced real meals (such as they were), I will remember that flight attendants maybe don't even get to wear scarves in their hair, which I think, as long as it is in the right color, is a perfectly reasonable request!

ALSO--wild and crazy--if you click on the small, universal "handicapped" sign to the right of the robot filter thingy, you get to hear the most fascinating audio version of a different robot filter. Very interesting and cool.

Hello Business Casual (aka BC)!

Ok wait a second - skorts are BC now?

Hmmmmmm skorts?! Could they be THE Fashion Statement for summer 2008???

Wow...I never knew it was this strick...I guess they have to be...I like the apron, but lately that's what I have been wearing. BR1 had one made for me in digital camo...I love it! You can't see whatever stain or dye I am into that day. Post pics when you can...I would like to see how they look...
Have fun! Maybe BR1 will get to meet ya as much as he has been traveling...Take care, Jenny (KoTL04)

Since I've only ever seen you in your Hiking Casual attire, I can't imagine that person dressed in Flight Attendant Drag.

The sweaters do look like track suit jackets, OR Star Trek uniforms! I like the light blue ones.

I, too, wear a uniform to work, and i love it! (scrubs) They are a great way to hide the nice warm kitty that sits on my lap when I sit down. They are comfortable, and I don't have a panic attack having to go shopping for 'work clothes.'

Maybe we will see you in the skies somewhere soon! (although i hate to admit i usually fly Alaska- San Diego to PDX can't be beat.)

Does Ryan know about the "Skorts?" I seem to remember something about Trekkie Girl, Skorts and Ryan from a while back, maybe over the summer. The new uni's look nice.

i'm sorry but what is the PURPOSE of wearing a scarf around your neck (except to hold your head on?)... at least a scarf in your hair would be useful (and pretty).... i cant think of a single job where you'd really NEED a scarf wrapped around your neck. just another one of those sexist hoops women have to jump through to "look pretty" rather than be useful or smart.

Flair is heavily regulated. We have certain approved buttons and pins that we can wear and then they require that you wear them a certain way. Under the wings, opposite lapel of the wings, on the apron only etc. For the holidays, we can wear only certain things and within certain sizes! (holiday earrings cannot be larger than a Quarter)--holiday ties are only to be worn by men (although you will see female flight attendants wearing holiday ties anyway! I was admonished for wearing holiday socks one year (unapproved) and they weren't even gaudy holiday socks, they were very discreet argyle socks in navy (the approved sock color) with red and green argyle lines/squares. I had even gotten several compliments on how cute they were from some first class passengers. And then a supervisor in the DCA airport stopped me, and told me I had to take them off! This was witnessed by a couple of pilots who after the supervisor left the area, told me that I better not take off my socks!! :-)

so...did you take off your Christmas argyle socks?! I bet it did look good.