Ryan and I were reading a wonderful book last month called "The White Cascade" by Gary Krist. 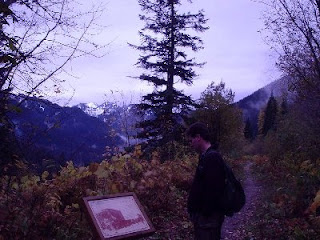 
It contains the history of the building of the railroad through Stevens Pass and the 1910 avalanches that stranded two trains for more than 7 days and ultimately destroyed them. I had also read several years ago, a young adult book called, "Washington Avalanche, 1910" by Cameron Dokey which is a Historical romance and a fictionalized account of the disaster.
http://www.amazon.com/Washington-Avalanche-1910-Historical-Romance/dp/0671036041/ref=sr_1_1/103-7026171-6393451?ie=UTF8&s=books&qid=1193111110&sr=1-1

In 1910, snowslides delayed two trains at the town of Wellington, in the Cascades just west of Stevens Pass. 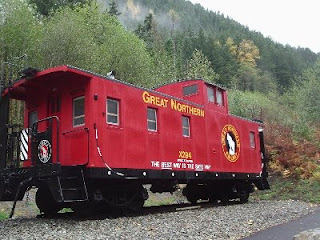 After more than 7 days, a vast section of snow broke loose and crashed down, sweeping both trains off the tracks and into the Tye Creek below. Rescue efforts were quickly organized, but 96 people died in the disaster.
This tragedy made Wellington the site of one of the worst railroad disasters in the nation's history and also the most tragic snow avalanche. This prompted improvements to avoid such tragedy striking again and many snowsheds were built over the railroad line to protect it from avalanche damage. The name of the station at Wellington was even renamed Tye Depot so passengers would not associate it with the rail disaster. As rail traffic increased, a "new" Cascade Tunnel was completed in 1929. This eight-mile tunnel is still in use today by the Burlington Northern Santa Fe Railroad, and Ryan has even traveled through it on one of his many Amtrak adventures. The opening of the new tunnel in 1929, made the old grade obsolete and it was abandoned completely. It is this abandoned stretch that makes up the Iron Goat Trail today. The town of Wellington was abandoned in 1929 when the new tunnel was completed. 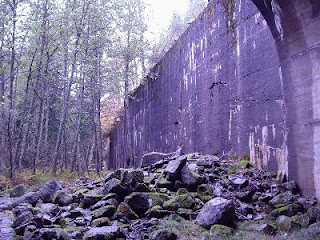 Ever since we read " The White Cascade", Ryan and I had been wanting to drive out to Stevens Pass and hike along the Iron Goat Trail to where the disaster took place. There are three trailheads currently along the Iron Goat Trail and they are continuing to convert the old railway to hiking trail further to the west. We decided to start at the Scenic Trailhead, because it was the easiest to access from the highway. Also Scenic has an interpretive center of sorts. A bright red Great Northern Caboose is on display and there are information boards with photos of the building of the railroad, the disaster and the building of the current hiking trail. 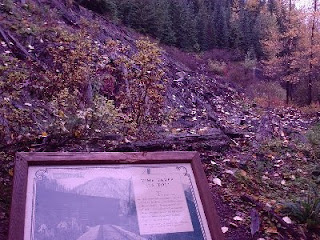 Yesterday, Ryan and I retraced the steps of the survivors of the Wellington Disaster. Several people from the train hiked out in drifts of snow and in danger of avalanches from Wellington, where the train was stopped to Scenic 3 miles away. We started at Scenic and followed the Iron Goat Trail back to the site of the avalanche. A boardwalk goes out to an observation platform there now. Along the trail are many concrete walls, all that remain of the snowsheds that were built to protect the railroad line in the years following the disaster. At one spot, there is a pile of broken timbers. This is the remains of one of the wooden snowsheds that collapsed and was not scavenged for the lumber (as happened with most of the wooden structures after this section of track was abandoned.) 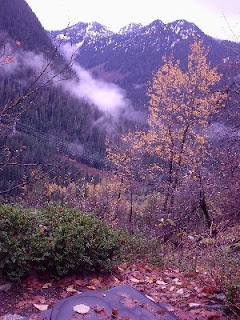 Also along the trail was one of the most scenic outdoor toilets that I have ever encountered. With Ryan's experiences on the AT, he has seen many scenic outdoor privies, but I don't encounter them that often and this one had a spectacular view! The black corner at the bottom of the photo is the seat of the toilet 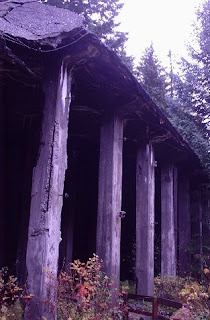 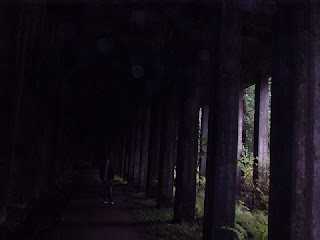 I added Pictures of the Concrete Snowshed for Ryan! 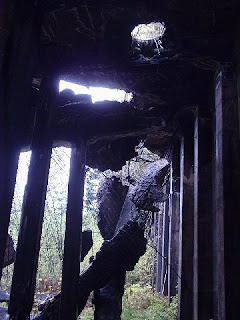 Posted by Amanda from Seattle at 10:01 PM

Gotta love the "Out" without the house. I've seen a few of these in the "daks" and the greens. Looks like a beautiful hike. I miss getting out to the mountains.

We didn't find any bodies from the Wellington disaster.... just in case you were morbidly curious. =)

Fascinating, fascinating hike, though. If you ever get the chance, it's so worth it. And I'm surprised Amanda didn't include a picture of the concrete snowshed that was created at the site of the Wellington avalanche. The wooden ones are long gone, but that concrete one is pretty freakin' cool!

Being new to the area, I'm still learning about a lot of the trails in the mountains. (We've been having a great time exporing around Mt. Baker.) I've been told by several people that Stevens Pass is the most beautiful pass in the country. This hike sounds like another great reason to go investigating! Thanks for the info!

Being new to the area, we're still learning about all the great trails in the mountains. (We been having a great time exporing Mt. Baker.) I've been told Stevens Pass is the most beautiful pass in the country. This hike is another great reason to get out there! Thanks for the info!

That is a great area...I grew up there...if you look around you can still expore the old wreckage in the valley below...you can also go into the old abandonded tunnel..(5 miles long)...great times!

Actually, please DON'T go into the tunnel. It's very unstable and has partially collapsed.

the Old Cascade Tunnel is about 2.5 miles long, the Western portion of it caved in from the rains we had in 2006. I was able to hike through it back in 2002 and it was quite the trip. Every so often there were little niches that looked like entrances to a smaller tunnel but they were for old phones for communication, similar to the new cascade tunnel. Here is what the top of the tunnel from above looks like now:

I have been hiking this trail annually since 1990 when it was a little known area-I had always been fascinated with the Windy Mountain Tunnel and the Old Snowsheds.