Dinner Train~Pledges are up to $850

I am really getting excited about starting to hike for the hike-a-thon. Ryan and I have several camping and hiking trips planned for August. And we are going to be doing some hiking next week as a pre hike-a-thon treat! My pledges are up to $850. Only $50 away from my $900 goal and I really think I can make it to $1000 this year. You should want to surpass your goal right?!

Ryan and I went on the Spirit of Washington Dinner train this week for his Birthday Dinner. It was a lot of fun. It leaves from Renton at 6:30 pm. So we were out there about an hour early. I wasn't sure about 5 o'clock traffic heading for Renton, so we budgeted plenty of time to get there. 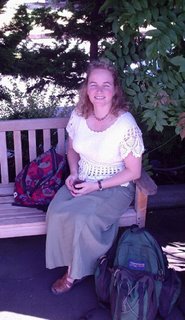 They had a little bar set up and you could get a drink while you were waiting, so that was nice. I had a glass of wine. The little depot is set up like a real train depot and it is really cute. There are pictures on the walls of the original train service in the Renton area.

We boarded the train and I ordered a three-course wine assortment to go with my meal. We were sitting in the dome car in order to get the best views during the trip. Although Ryan did notice that the leg room was better in the other cars. Our booth was a bit cramped. We had a booth to ourselves and did not have to share with the other tourists on the train. We started the meal with bread. They had a selection of rolls including corn bread muffins and a trio of butters that included a salmon butter! Our server came by with wonderful salad tossed with toasted almonds and a fancy dressing. They even give you the recipe for the salad dressing in your brochure for the train! Ryan was a bit thrown by the sour tomatos. They were actually grapefruit slices. The main course—I had the salmon and Ryan had the prime rib—was okay...I've had better.

The ride was really enjoyable. I haven't been on a real train before, only tourist trains like this one, so Ryan was able to regale me with his Amtrak adventures as we set off. The total trip is about 3 1/2 hours and you spend 45 minutes up at the Columbia Winery. The train tracks go along Lake Washington and we were able to recognize many of the sites as we made our way north to the Columbia Winery. It was also fun to check out the homes along the route. The train stops at the winery and you can take a little tour of the operations of the winery or you can find a letterbox like we did! We spent the rest of the time, perusing the gift shop. (well, Ryan perused while I did some wine tasting)

The highlight of the return trip was dessert and the balloons that were sailing around the Woodinville area. A balloon ride, that will have to be our next Birthday adventure! For dessert, I 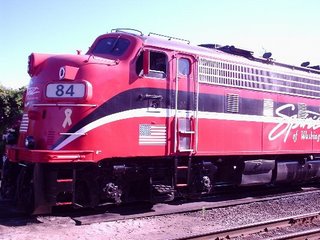 had the Chocolate Cake with Raspberry puree and Ryan had the Apple Crisp. Both were excellent. Mine came with a Whidbey Island Port that was very nice.